From the Meadow of Strange Art we continued west on I-90 to Badlands National Park.  (Nature helpfully located many of South Dakota's most interesting features right next to the interstate!)  It's two parks in one: the eroded buttes and spires that give it its name, and enormous stretches or grassland that are home to bison, mule deer, antelope, and prairie dogs. 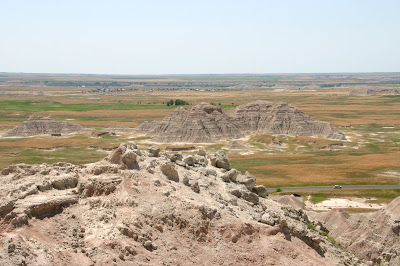 We pitched our tent in the primitive campground, which featured nothing but picnic tables and pit toilets.  Backcounty camping is permitted in some parts of the park, but the views wouldn't have been much different. 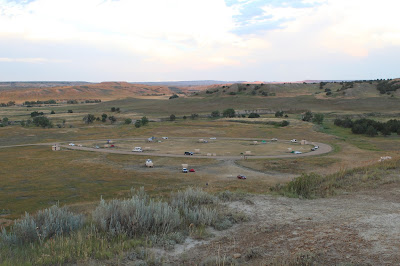 We stayed two nights, and the weather followed a consistent pattern: strong wind, distant thunder-and-lightning, dramatic skies, but little-to-no rain.  Around dusk coyotes would start yipping, usually from multiple directions.  It sounded like we were surrounded!  At some point the first night, the wind blew so hard that the tent wall started pushing in on us.  I was lying there in my sleeping bag holding it up and wondering if we should run for the car.  Little did I know that would be a common occurrence as the week went on! 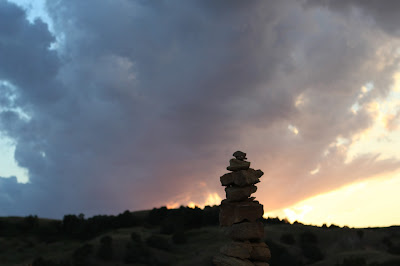 We saw two separate bison herds, with maybe two hundred individuals in each one.  Solitary bulls would amble right by the campground early in the morning and late in the evening. 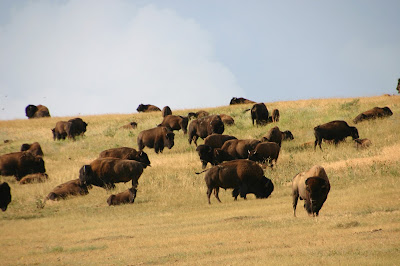 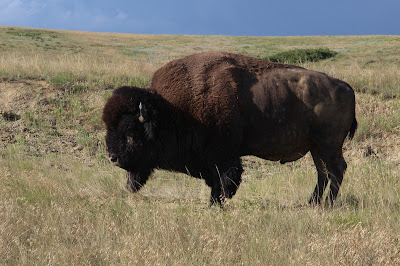 Prairie dogs were in their villages, doing their standing-on-the-hind-legs act.  If we stopped the car to take pictures, they prepared to duck into their holes.  I'm sure the local people think of them as pests, but since I don't farm or ranch, I just think of them as cute. 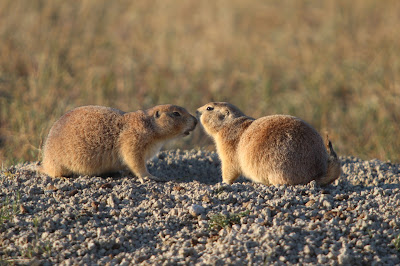 Not long after we arrived, we saw a family (a flock?) of bighorn sheep right by the road, with several people pulled over to take pictures.  We didn't have a camera in a convenient place, so we didn't take any pictures.  (We learned our lesson after that!)  But one morning we got up early and managed a few shots of one: 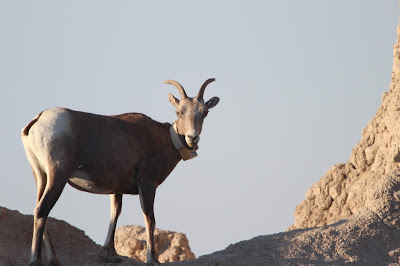 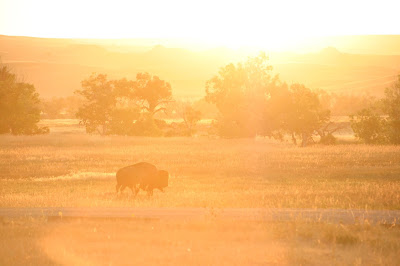 Badlands is one of those parks that's a little less known, so it's not full of people in the summer–my favorite kind!