Arthropod of the Moment

Although it looks like something H. R. Giger thought up, this little beast is merely the product of millions of years of evolution, just like the rest of us.  It's known as a wheel bug, Arilus cristatus.  It's a member of a group known as assassin bugs because of their predatory skill.  By the way, that's not my hand that he's on.  I have people who do that for me--I just shoot the pictures. 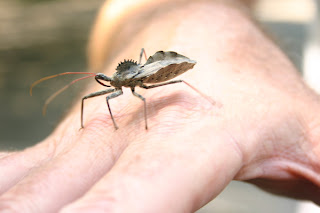 The original Assassins were a violent Persian sect which started around the year 1040.  As with Thugs and Goths, they lent their name to other people in modern times.  Jocks and nerds are of more modern origin, but the Band Weenies were originally a well-known tribe in medieval Europe.
Posted by Yonts at 9:00 PM

As the owner/operator of the hand bearing the assassin bug, I am not so sure I would be so ready to handle her again, knowing what I know now. A beautiful bug, and I am durn proud to be able to contribute in some small way to the advancement of human knowledge and experience!

Be careful. Assassin bugs (triatomines) are potential vectors for the protozoa that causes Chagas disease: http://bmartinmd.com/2008/06/parasitic-and-other-infectious.html.

It's probably a good practice to be cautious around anything with "assassin" in its name! It would be interesting to know if only the bloodsucking assassin bugs can pass this parasite, or if the insect eaters, which would presumably only bite a person in self defense, could also carry it.